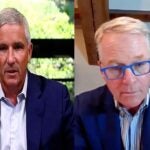 And on Tuesday, the PGA Tour and the DP World Tour moved to strengthen theirs, marshaling forces in their escalating conflict with a Saudi-funded circuit that is fast reshaping the professional game.

In a joint press conference, PGA Tour commissioner Jay Monahan and DP World Golf Tour CEO Keith Pelley detailed a new 13-year joint operational agreement between their organizations, a deal designed to provide a fresh pathway for players onto the PGA Tour while increasing prize money in DP World Golf Tour events. As part of the arrangement, the PGA Tour will increase its ownership stake in European Tour Productions from 15 percent to 40 percent, providing a cash infusion to boost purses. The arrangement also guarantees that, starting in 2023, the top 10 finishers on the DP World Tour will receive a PGA Tour card for the following season. Because the DP World Tour also has alliances with the Sunshine Tour and the ISPS Handa PGA Tour of Australasia, the partnership will open pathways toward the upper echelons for players from around the world.

The joint operational agreement, which is good through 2035, builds on an existing strategic alliance that the two tours forged in 2020, a partnership that has given rise to co-sanctioned events on both sides of the pond, including the Genesis Scottish Open, which will take place next week.

“We will continue to collaborate on a global schedule and key commercial areas as we draw our organizations and memberships even closer together while innovating to provide the most entertaining and compelling golf possible to fans around the world,” Monahan said.

Word of the strengthened alliance comes as LIV Golf prepares to stage its first State-side event, at Pumpkin Ridge Golf Club, outside Portland. In recent weeks, the Saudi-backed circuit has bolstered its ranks with a growing number of household names, including Brooks Koepka, Bryson DeChambeau, Abe Ancer and, most recently, Matt Wolff, all of whom will make their LIV debut at Pumpkin Ridge. LIV is expected to announce more additions to its roster in advance of its second U.S. event, at Trump Bedminster, in New Jersey, at the end of July.

At Tuesday’s joint press conference, Pelley described the strategic alliance as a “natural extension and progression of what we have been doing over the past few years.” But he acknowledged that the tours had been forced to move more quickly and aggressively in response to a rival circuit that continues to poach talent.

Both the PGA Tour and the DP World Tour have already acted separately to sanction players who competed in the first LIV event, outside London, earlier this month, by issuing fines and suspending tour memberships. But such efforts have not put an end to defections.

Just last week, the PGA Tour brought the fight to another front by introducing what amounts to a $54 million purse increase spread across eight of its biggest events, including a $25 million bump in the Players Championship purse and a $20 million increase in several other tournaments. The Tour also unveiled plans for a new lucrative series of up to three events for the top 50 players in the Official World Golf Rankings.

But even as the increases were announced, Monahan made clear that the Tour could not hope to win its fight against a Saudi-funded rival on dollars alone.

During Tuesday’s press conference, Pelley echoed that point, stressing the value of history and legacy of a traditional golf ‘ecosystem’ that has long featured the best players in the game.

These were Pelley’s first public comments about LIV, and he used the opportunity to dismiss rumors that his tour had entertained a formal offer to join forces with the Saudi-backed circuit. Pelley said that the DP World Tour board had reviewed a presentation—not a formal offer— from the Saudis in September of 2021 but had found that presentation unappealing and disregarded it.

As part of its new joint operating venture, the DP World Tour plans to work with the PGA Tour on the implementation of its new international series of events. Under the arrangement, DP World Tour members will be able to play their way into those competitions.

“I passionately believe that this move is the right thing for our players, our Tour, our fans, and the game of golf in general,” Pelley said.

Pelley was speaking from Europe, where the Irish Open gets underway this week. Monahan was in the Quad Cities area of Illinois, where practice rounds for the John Deere Classic were being played. At the same time, LIV players were descending on a sylvan course just outside Portland.

It’s a global golf war. Where it’s headed next is difficult to say, but it shows no sign of slowing.