Who an expert (and golf fans!) think will win 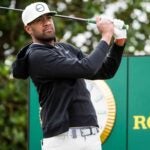 Tony Finau is searching for his third Tour win.

For all the advances in golf analytics, we still don’t have a stat that accounts for jet lag, a metric that might come in handy this week. Following three straight events across the pond, we turn our gaze 3,700 miles and six time zones west to the 3M Open, at TPC Twin Cities, in Blaine, Minn.

Fresh off a celebration with a beer-filled Claret Jug, Cameron Smith is taking downtime, as is every other player in the world top 10. But a bunch of household names who competed at the Old Course will be getting right back at it, including betting favorites Tony Finau, Hideki Matsuyama and Sungjae Im.

Andy Lack will be working, too. Although he doesn’t have a stat for how the players deal with the wear and tear of travel, GOLF.com’s expert prognosticator devotes his days to tracking troves of other data, and he’s here to help us with our Trifecta picks.

Trifecta is the game with play on Chirp.com, a free-to-play mobile platform that is also an affiliate of GOLF.com. It calls for us to pick three players: a favorite, a contender and a long shot, all categories based on the Official World Golf Ranking.

Nearly 1,000 Chirp users have already signed up for this week’s Trifecta contest, a healthy sample that gives us a sense where public sentiment is leaning. We’ll share that data below. But first, let’s get to Lack’s three picks.

Fresh off a T28 at the Open Championship, Finau is returning to an event in Minnesota where he has never finished worse than 28th in three appearances. After a slow start to the season, the World No. 17 has turned it around with four top-15 finishes in his last six starts. The recent change to bentgrass golf courses on the summer schedule has also been a boost to last year’s Northern Trust winner. Positioning off the tee and staying out of the hazards is paramount at TPC Twin Cities, and Finau is the best total driver of the ball in this field.

While Im’s recent results leave a lot to be desired, a deeper inspection proves that he is not as far off as some would expect. He is coming off an 81st place finish at the Open, where he gained over three strokes ball-striking and lost a whopping 10.4 strokes putting. This was Im’s worst putting performance of his career by healthy margin, and I would imagine we see some positive regression out of a player who has already experienced loads of success on slick bentgrass greens. This is an intriguing buy-low spot on the two-time PGA Tour winner.

While Svensson might not yet be a household name, his breakthrough is a matter of inevitability. The Canadian is coming off a sixth-place finish at the Barbasol, where he gained 2.4 strokes off the tee and 7.4 strokes on approach. Svensson has already proven himself as a worthy ball-striker, and now the putter seems to be coming around as well. He has gained strokes putting in seven straight starts, and he now returns to a course where he finished 15th on debut in 2019. Svensson is a name to look out for, both this week and in the future.

Those are a pro’s picks. But what about the Chirp-using public?

In the favorites category, Hideki Matsuyama leads the way with 37.82 percent of the vote, followed by Tony Finau (24.64 percent) and Sahith Theegala (9.74 percent).

Among the contenders, fan-favorite Rickie Fowler is the top vote getter by a wide margin with (39.26 percent). He’s followed by Adam Svensson (15.33 percent) and Dylan Frittelli (6.88 percent).

In the long shots category, Brice Garnett is the people’s choice with 17.9 percent of the vote. Brandt Snedeker is close behind in second (17.05 percent), followed by Doc Redman (10.32 percent).

Want in on the fun? Click here to enter Chirp’s free-to-play Trifecta game for yourself.