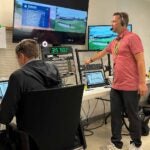 Most of golf television is not glamorous. There are dimly lit production trailers and hastily built conference rooms, mobile cities and porta-potties. Many people work long hours with few breaks; some don’t even have time for the bathroom.

Still, golf television is the big show. The process of bringing a broadcast to air requires a small army of staffers, expertise and high-tech digital equipment. Some have compared the experience of working in golf television to hundreds of engineers assembling a plane in the air, but even that undersells the scope. It’s more like assembling a plane in mid-air — in the middle of a hurricane.

By comparison, golf radio is … hardly anything at all. Take, for example, SiriusXM’s setup. There is but a single production trailer, a small team of producers and talent and an even smaller group of on-course reporters. There is no magic wand — everything that comes out of SiriusXM comes from this team (and a small crew of helpers back at company HQ in Washington, D.C.). If golf TV is a double-decker 747, golf radio is a six-seater prop-plane.

This is what makes golf radio not only different but also so damn charming.

Golf radio is fast, it is fluff-free, it has no “Playing Throughs” or “Eyes on the Course.” It places a deep emphasis on presenting golf shots, leaderboard updates and scores — bothering itself largely with presenting the picture of the golf tournament as it is, and less so with painting in the corners.

That’s because it has to operate this way. At SiriusXM, the team understands that the average listener only tunes in for somewhere between “12 and 25 minutes,” which means it is their job to provide the listener with all the info they need to know once every 12 minutes, over and over again, for the duration of the broadcast.

“It all goes back to this formula of getting everything in that you have to know without too much of the extra stuff,” Jeremy Davis, Sirius XM’s lead director, told me at the U.S. Open a couple of weeks ago. “There are times when it helps to be poetic. But there are times when that leaves the listener like, Wait, what’s going on? Where are we?”

Davis has been steering the show for more than two decades. On a normal tournament day, it is his eyes and ears (alongside executive producer Justin Ware’s) that determine what goes on the air, and when.

To do this, Davis and Ware have access to two monitors: the live TV broadcast as the average fan would see it, and another monitor, in which they can punch in a code to look live into every camera on the course. Once they’ve made up their mind on which shot to highlight, the two-man team queues the broadcasters, who watch from a different monitor next door; and the on-course reporters, who are watching from inside the ropes. It all amounts to an on-air game of tennis, in which producer and director and on-air team trade volleys for hours.

During the broadcast, it is Davis and Ware’s job to anticipate — knowing when players are, where they are, and how long it’ll take them to get there. The goal is to maximize the amount of stuff — shots, players, updates, scores, broadcast voices — in each broadcast, while wasting as little time as possible waiting on players.

At the beginning of tournament weeks, Davis uses a stopwatch to measure the time it takes to walk from the green to the tee box of every hole. Also crucial, Davis says, is the cadence of the golf course.

“The difference between a drivable par-4 and a long, two-shot hole is massive for us,” he says. “It means a few more golf shots, or another leaderboard update, or something else. By the time the weekend comes, we know every course we’re covering blindfolded.”

For Davis and Co., the work amounts to building tiny “improvements” for the listener. More shots, more information and, of course, more golf. It’s an entertainment product that prides itself on bringing the action to golf fans, and it’s one you have to see — or perhaps hear — to believe.

James Colgan is an assistant editor at GOLF, contributing stories for the website and magazine on a broad range of topics. He writes the Hot Mic, GOLF’s weekly media column, and utilizes his broadcast experience across the brand’s social media and video platforms. A 2019 graduate of Syracuse University, James — and evidently, his golf game — is still defrosting from four years in the snow, during which time he cut his teeth at NFL Films, CBS News and Fox Sports. Prior to joining GOLF, James was a caddie scholarship recipient (and astute looper) on Long Island, where he is from.