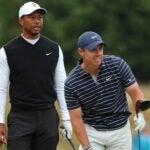 What does it take to win on Sunday at St. Andrews? According to Tiger Woods, not a whole hell of a lot.

During NBC’s Sunday broadcast from the Open Championship, on-course reporter John Wood read aloud a text exchange with Tiger in which the 15-time major champ revealed his Sunday “advice” for the tournament’s co-leaders. The overarching theme?

Don’t screw it up.

“I happened to text the master last night, Tiger, to see what he would be thinking going into this final round,” Wood said on the broadcast. “He was nice enough to answer.”

Tiger’s advice, Wood said, was as pragmatic as it was earnest.

“If I shot 19 under par, which would tie the lowest score in relation to par in all four majors, I would win,” Tiger told Wood. “How do I go about doing that? No bunkers. No three-putts. Take care of the drivable par-4s, and take care of the par-5s. Maybe sneak in one or two more.”

“Lo and behold,” Tiger said. “A score around 68 without doing anything too special.”

That is, of course, much easier said than done. Surviving Sunday at St. Andrews will be a gauntlet, not a sprint. Particularly on an Old Course setup that’s the longest it’s been all week and features pin placements meant to sucker players into mistakes.

But if that advice sounds familiar, it’s because Tiger himself has been here before. Back in 2000, Woods also entered Sunday at St. Andrews with the lead and the chance at his first-ever Open Championship win. At the 54-hole mark, he held the same score — 16 under — as McIlroy and Hovland, and took the same strategy to managing his way around the Old Course on Sunday.

The result? He shot 69, hit no bunkers, made no three-putts and escaped with a final score of … 19 under par.

Everything old is new again at the Old Course, including, evidently, the strategy required to manage a Sunday afternoon round with the lead.

As for whether that means that, like in 2000, we’re in line for another historic coronation? Well, we’ll just have to sit tight Sunday afternoon and find out.

James Colgan is an assistant editor at GOLF, contributing stories for the website and magazine. He writes the Hot Mic, GOLF’s weekly media column, and utilizes his broadcast experience across the brand’s social media and video platforms. A 2019 graduate of Syracuse University, James — and evidently, his golf game — is still defrosting from four years in the snow. Prior to joining GOLF, James was a caddie scholarship recipient (and astute looper) on Long Island, where he is from. He can be reached at [email protected]