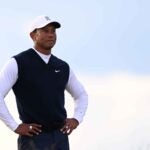 Tiger Woods shot an opening-round 78 at the Open Championship.

Thursday wasn’t the start Tiger Woods was hoping for at the Open Championship.

After over six hours on the Old Course, his scorecard wasn’t pretty. In fact, it was downright ugly. Five bogeys. Two doubles. He added three birdies, too, but they were hardly enough to offset the damage.

When he walked off the 18th green, the giant yellow scoreboard towering above the grandstand displayed a rude reminder of what the day held. Woods — 78. Those left in the bleachers showered him in light applause. But the cheers were tinged with sympathy, a stark contrast to the roars of adoration he’d produced at St. Andrews in years past.

“[It was] probably highest score as I could have shot,” Woods said of his six-over total. “Looks like I’m going to have to shoot 66 tomorrow to have a chance.”

Twelve hours prior, optimism for the 15-time major champ at the Open was soaring — and for good reason. He’s won twice before at the Old Course, both times in dominant fashion. The expected conditions — firm and fast — suit his style to a T. The weather looked to be cooperating. And his early-week prep was crisp. If there was a major Woods could contend at in 2022, this was it.

It took all of 15 minutes for that optimistic outlook to show cracks.

Despite striping a perfect opening drive, his ball settled in a sand-filled divot. An inopportune gust sent his approach bounding into the burn short of the green, and he walked off the 1st green with a double bogey. Back-to-back squares on the card followed at Nos. 3 and 4, and after a double bogey at the 7th, the optimistic outlook was fully shattered.

“Didn’t get off to a great start,” Woods said.

He managed to steady himself over the final two-thirds of the round, but after the abysmal start, there was little an even-par stretch could do to soothe the sting. This was the tournament Woods (and everyone else) had zeroed in on. Made cuts at the Masters and the PGA were monumental steps in his recovery, but this was supposed to be the week he put it all together.

The reality of Woods’ play was sobering. But that doesn’t mean this day was all bad. In truth, it was far from it.

In the days following Woods’ February 2021 accident, the narrative was not concerned with birdies and bogeys. It was about whether or not the icon of our sport would ever even walk again. Whether or not he’d be able to live a healthy life and enjoy time with his kids. Later that year, we learned that there was a question on if he’d lose his right leg.

When reminded of those dark days, the prospect of a couple doubles at the Old Course doesn’t seem like such a big deal.

It’s not just that Woods was able to play in the 150th Open Championship that gave today some semblence of positivity, it’s how he looked doing it. The gait in his step that was on display at Augusta and Southern Hills was far less severe. Grimaces after poor shots were absent. And even on an agonizingly slow day at a major, his body held up till the final putt dropped.

Notah Begay — an NBC on-course reporter and confidant of Woods — remarked during the round that this was as healthy as his old college teammate has looked in quite some time.

Woods reiterated the strides he’s made in his health as compared to his previous starts when he met with the media after the round.

“It was a lot easier today, physically, than it has been the other two events,” he said.

Thursday represented more than a squandered opportunity at reliving major-championship glory. It was another chapter in an unmatched legacy of resilience. It’s a fact that even the uber-competitive Woods could recognize.

“[It was] very, very meaningful,” he said. “All things considered, where I’ve been, I was hoping I could play this event this year. Looking at it at the beginning of the year, end of last year when I was rehabbing. Trying to see if I could do it.”

Don’t mistake his remarks for complacency, though. Woods still showed up this week to win — and a moral victory isn’t something he’ll dwell on.

“This was always on the calendar to hopefully be well enough to play it — and I am,” he said. “[I] just didn’t do a very good job of it.”