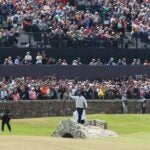 Tiger Woods crossed Swilcan Bridge for what could be his final time as a pro golfer on Friday.

For a few moments on Friday afternoon, the whole world turned its attention toward the Open Championship at St. Andrews. And down on the 18th fairway at the Old Course, Tiger Woods did not disappoint.

There was Tiger — the four-time Open Champion, a two-time winner at St. Andrews — walking up the 18th fairway at the Old Course. In some ways, it was a sobering moment. Woods was nine-over for the tournament. He’d just made an ugly double on the 17th. His putter and his driver and his irons were balky all week, but none looked balkier than his gait, which had once again slipped into a limp. The cutline was but a distant memory. There was just one thing that stood between Tiger Woods and a missed cut at the Open, and it just so happened to be the most famous landmark in the history of the sport: Swilcan Bridge.

But of course, it was so much more than that. Woods is 46 and, as everyone with a heartbeat knows, is closing in on the twilight of his professional career. He’s battled his way through three major starts this year — just a year removed from the car crash that nearly took his life — and has played all four rounds in only one of them, a near-last-place finish at the Masters. This Open, the 150th, could be Tiger’s final as a serious competitor at the Old Course, his self-professed favorite course in the world. Earlier this week, Woods admitted that his rehab efforts in 2022 had all been centered around finding a way into the field at the Open. On Friday afternoon, he’d done it, alright, but the experience was about to come to an end.

Woods struck his drive down the center of the fairway, and then began his walk. He was not more than 10 feet off the tee box when the thousands surrounding the 18th fairway erupted. Fans hung out of rooftops and balconies, stood 10-deep along the street and packed by the thousand into grandstands. They had done it all for the opportunity to bid Tiger adieu, and they were going to make sure he heard them.

As Tiger neared closer to Swilcan Bridge, his playing partners — Max Homa and Matthew Fitzpatrick — hung back. Woods noticed their pause, but he did not break his stride. He removed his hat and ascended Swilcan with it outstretched above his head. He charged across the bridge, heading out to his tee shot. By the time he reached 50 yards or so short of the green, the gravity of the moment finally caught up to him. He lowered his head, wiping tears from his eyes, before waving a few times more.

Up at the green, Woods lipped-out for birdie. He signed for a three-over 75, summarily missing the cut, not that anyone cared.

The moment of the week came two days early at the 150th Open Championship at St. Andrews. We were glad it came at all.

James Colgan is an assistant editor at GOLF, contributing stories for the website and magazine on a broad range of topics. He writes the Hot Mic, GOLF’s weekly media column, and utilizes his broadcast experience across the brand’s social media and video platforms. A 2019 graduate of Syracuse University, James — and evidently, his golf game — is still defrosting from four years in the snow, during which time he cut his teeth at NFL Films, CBS News and Fox Sports. Prior to joining GOLF, James was a caddie scholarship recipient (and astute looper) on Long Island, where he is from.