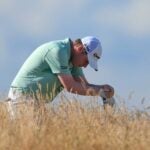 Robert MacIntyre is the highest-ranked Scot at the Open Championship.

The Scottish lefthander has had a terrific record in Open Championships — T6 and T8 in his only two starts — but this was the first time he’d played one in his home country. He’d circled the tournament on his calendar. He’d been greeted like a hero. He called the first day a “dream come true.” But there was pressure associated with being the tournament’s Great Scottish Hope. While two other Scots were in the field, one was 53-year-old Paul Lawrie and the other was David Law, who was making his major championship debut.

MacIntyre opened with a strong round of two-under 70, setting himself up to contend. But his Friday got off to a sketchy start with bogeys at 2 and 4. Instead of chasing the lead, his mind suddenly went to the cut line.

“I’ve never been that stressed on a golf course in my life,” he said. “With seven holes to go, I didn’t know what was going on.”

Massive galleries greeted him at every tee and every green. Still, he couldn’t get anything going. He drove it on the par-4 12th but three-putted for par. He bogeyed the par-4 13th. And after getting that shot back at No. 14, he handed it away again with a bogey at No. 15. As he got to the 16th tee he took a moment to collect himself.

“Had to turn away from the actual fairway on 16 because there was too much going on,” he said. “Fan support is absolutely brilliant, but I was feeling it.”

The moment felt massive for MacIntyre, in part because he knew how much it meant for Scottish golf fans.

“You’re not letting people down, but you know how much it means,” he said. “There’s so many people supporting me, and it means so much to me that I just didn’t — I wasn’t going to let them down because I was having a hard bit, but I was trying almost too hard.”

“The two putts on 16 and 17 yesterday, I just gave up,” he said on Saturday. “I was like, great, I gotta have these putts, and if they go in, they go in. Thankfully, I holed them.”

Par at the short 18th ensured he would make the cut on the number. He was exhausted when he finished.

“I was sitting at the dinner table just slouched, didn’t know what to do,” MacIntyre said. “I was trying to eat, but I was just — I was done. I could have curled up in a ball when I finished and cried.”

He woke up Saturday in a tie for 66th and under significantly less pressure. He bogeyed No. 2 but got going after that, making five birdies and just one bogey the rest of the way.

“I enjoyed it today because there was no consequence,” MacIntyre said. “I was hitting shots I wouldn’t have hit, like, yesterday. For instance, on 16 I hit bang driver down the left. Whereas yesterday I had to turn away on that hole because I just had to switch off from golf for a second to give me a bit of peace.”

MacIntyre is playing in his 10th major this week and has now made the cut in all 10, including his two top-10s in his previous two Open starts. At 25 years old, he knows he has plenty of time to add to his professional resume. But he’s logged just one top 10 across the PGA and DP World Tours in 2022 and is eager for a kickstart. He’ll begin the day outside the top 40, too far back to contend. But he’ll hope to catch some good vibes from his countrymen nonetheless.

“Tomorrow is going to be absolutely brilliant,” he said. “Hopefully I’ll go out a bit later and hopefully shoot a bit lower than today and get the crowd going.”