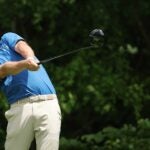 Zach Johnson hits his tee shot on Thursday on the 2nd hole at TPC Deere Run.

He didn’t say no outright. Nor did he say yes.

Instead, Zach Johnson answered matter-of-factly when the next U.S. Ryder Cup captain was asked this week whether those playing LIV Golf tournaments could also play in the biennial event.

“I’ll let you connect the dots from there.”

Should you, Johnson’s response would imply that you likely won’t be seeing Americans Brooks Koepka, Bryson DeChambeau, Dustin Johnson, Patrick Reed and Phil Mickelson when the Ryder Cup begins 15 months from now in Italy. Those five and 43 others are playing this week in the second event on the controversial, Saudi-backed LIV Golf series, and PGA Tour commissioner Jay Monahan has said he would indefinitely suspend any Tour member who would play in the upstart series.

On the European side, it’s also looking grim that LIV players could be picked for the Ryder Cup; the DP World Tour (the former European Tour) handles selection, and last week, it fined its members who played in the first LIV event and banned them from competing in three co-sanctioned tournaments. Still, despite what could turn into a contentious fight, Zach Johnson said he was understanding of why players have signed on with LIV.

“First and foremost, I mean I got some friends that have decided to go that route,” he said. “A lot of individuals that I’m for. I mean, these are my friends. I’m for them. I want them to do well. I want them to, you know, find contentment or happiness in whatever it may be. It’s not for me to say how that develops or how they find that. I will say I have the utmost respect for them individually. I would hope, and I’m not concerned about this, that they would have the respect for me and who I stand for and what I stand for. And I don’t think it’s very secretive or outlandish in saying that I’m for the PGA Tour. I’m for the individuals that paved the way for me in this great Tour, this way of, this platform in order to entertain, compete and I would say utilize for the betterment of others, not just my family. I’m for that.

A reporter then asked Johnson if he thought LIV would affect the John Deere. The tournament in the past has struggled to attract higher-ranked players based on its spot on the schedule, and this week, of course, it’s up against the Portland event.

“Do I think it affects this tournament? I think it’s so raw and so new it’s hard for me, it’s hard for anybody to say that it’s going to have a massive impact here or there,” he said. “My hope is that it does not, and my ever optimist brain of mine says it will not because of what’s already established here. I think players are starting to see that, you know what, it’s pretty darn good where we are right here. We’re starting to see some young guys even come out and say, that aren’t even on the PGA Tour, and say, you know what, I had a dream of playing on the PGA Tour and that’s the route I’m going to go.