Rory McIlroy is up for the fight, and 4 other things we learned Friday at the Open 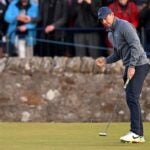 Rory McIlroy shot four-under 68 on Friday at the Old Course.

When Rory McIlroy teed off for his second round on Friday afternoon, the birdies were flying. And although McIlroy had put himself into the mix with a solid Thursday morning, his name had slipped off the first page of the leaderboard by the time he struck his opening tee ball in Round 2.

The Old Course was receptive on Friday, and those in the morning wave took advantage. When McIlroy strolled down the 1st fairway at just after 3 p.m. local time, he knew he needed to make birdies to keep from getting lapped by the field.

Luckily, McIlroy didn’t push and stayed patient throughout the day, once again putting himself among the leaders.

We’ll cover that, and more, in Friday’s Five Things We Learned at the Open Championship.

1. Rory is up for the fight

“Watching the coverage earlier on, the course looked easy,” McIlroy said. “So sort of just tried to play a little bit more on the front foot and be a little more aggressive. And I got off to a quiet start, but then I sort of came to life around the middle of the round.”

McIlroy went out in a quiet one-under 35, but after the turn, he made his move. Three straight birdies on No. 10-12 got the 2014 Open champ back into contention, and a nifty birdie at the Road Hole put him double digits under par and into the penultimate pairing on Saturday.

Despite the quiet start, McIlroy proved he was up for the fight. And he’s in excellent position to claim another Claret Jug this weekend.

2. Cameron Smith is a putting machine

Cameron Smith’s putting has long been his biggest asset, but on Friday, he put on a show with the flatstick impressive even by his standards. On his way to an eight-under 64, Smith holed over 200 feet of putts to hold a two-stroke lead at the halfway mark.

It’s a recipe that’s worked so far, and it has him eyeing his first major title.

Tiger Woods didn’t have the week he’d hoped for at the Old Course, but he still got to enjoy a special moment to finish his round. Walking up the 18th fairway, he was showered in applause in a sign of appreciation from the adoring fans. It was a moment that got that usually-stoic Woods emotional as he took in the scene.

It’s a sobering thought that Woods may never again walk the fairways of the Old Course, but he did not stop on the Swilcan Bridge to wave goodbye, so there remains hope he could return next time the Open heads to St. Andrews.

“It felt very emotional, just because I just don’t know what my health is going to be like,” Woods said. “And I feel like I will be able to play future British Opens, but I don’t know if I’ll be able to play that long enough that when it comes back around here, will I still be playing?”

Cameron Young entered the day in the lead, and 18 holes later, he’s still in prime position. A second-round 69 kept him in the mix, and he’ll play in the final pairing tomorrow with Cameron Smith, whom he trails by two shots.

“I’m in second — [I’d] rather be in second than tenth,” he said. “You’re going to have to play some good golf over the weekend regardless. So obviously nice to start up there, at least.”

Young carded five birdies in Round 2, and avoided any major blowouts to eject himself from the tournament.

And although the Wake Forest grad has yet to win on the PGA Tour, he’s no stranger to being in contention. He’s registered five top-10 finishes during his rookie season, including at the PGA Championship, where he finished a single stroke out of a Sunday playoff.

This weekend, he’ll hope to be one stroke better. If his play over the first two rounds are any indication, he’s certainly got what it takes.

The chatter around LIV Golf has been quieter than normal so far this week, but that doesn’t mean the controversial league has fully exited the spotlight. Thanks to a couple of defectors, LIV might become an even bigger storyline this weekend.

Dustin Johnson and Talor Gooch, two of the premier names in the breakaway league, played excellent golf Friday morning and have moved themselves into contention heading into the weekend. But, of course, many of the questions for the maligned pros focused on their playing allegiances.

“Everybody, it feels like, is against us, and that’s OK,” Gooch said after his second-round 69. “It’s kind of banded us together, I think.”

Don’t expect those questions to go anywhere as long as the LIV golfers remain in the mix this weekend.