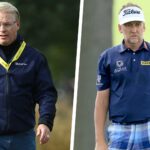 Keith Pelley (left) and Ian Poulter (right) have been involved in a tense exchange of statements this week.

The era of strongly-worded letters is not exclusive to Greg Norman and Jay Monahan. It extends to the DP World Tour and LIV Golfers who hold membership on that tour, too.

According to a report from James Corrigan of the Telegraph, 16 players on the LIV series have threatened legal action against the DP World Tour, which has suspended them from three co-sanctioned events with the PGA Tour and fined them each £100,000 for competing the the London LIV Golf event without a release. The legal action threat was included in “an open letter” that criticizes the tour for being “grossly unfair and likely unlawful.”

Whether or not that is an accurate representation will be decided at a later date. All we know now is that it properly got the attention (and scorn) of DP World Tour CEO Keith Pelley, who issued a spicy statement of his own Friday morning.

“There has been a leak to the media of a letter we received on behalf of a number of LIV Golf players which contains so many inaccuracies that it cannot remain unchallenged,” Pelley said in the 553-word statement.

“Before joining LIV Golf, players knew there would be consequences if they chose money over competition,” it continued. “Many of them at the time understood and accepted that. Indeed, as one player named in the letter said in a media interview earlier this year; ‘If they ban me, they ban me.’ It is not credible that some are now surprised with the actions we have taken.

“The letter claims that these players ‘care deeply’ for the DP World Tour. An analysis of the past participation statistics on our Tour in recent years of several of the leading players named, suggests otherwise.”

Pelley’s tour plays an intriguing role in the current war for professional golf. The DP World Tour has not only had a “strategic alliance” with the PGA Tour for 18 months, it strengthened that bond this week, incurring greater investment from the PGA Tour and establishing unprecedented connections between the two governing bodies.

But as he has repeatedly said, the two tours are not one. They act independently. However, the month of July features three different co-sanctioned events, the Genesis Scottish Open, the Barbasol Championship and the Barracuda Championship, the former two of which take place next week.

Those aforementioned 16 players threatening legal action against the DP World Tour are demanding their sanctions be reconsidered so they can compete next week in the Scottish Open, a longtime vital event to the World Tour. According to Corrigan’s report (which you can read the full extent of here) the letter requested the sanctions be rescinded by 5 p.m. local time Friday, and even criticized the World Tour’s alliance with the PGA Tour.

Many of the European LIV pros were comfortable resigning their membership of the PGA Tour, or unwilling to comment when the PGA Tour suspended them indefinitely one hole into their LIV Golf lives. But the World Tour stayed patient, only suspending players for those three events.

Pelley’s statement asserted that some of the players named in the legal threat are being hypocritical in their newfound appreciation for the DP World Tour.

“One player in particular named in the note has only played six Rolex Series events in the past five years,” Pelley said. “Another one, only four. I wish many of them had been as keen to play on our Tour then as they seem to be now, based on the fact they have either resigned their membership of the PGA Tour or, if they are still in membership, have been suspended indefinitely.

“Furthermore, given how deeply these players say they care about the DP World Tour, perhaps some of them could have played in Ireland this week in support of our new title sponsor, in particular one player who gave us a signed commitment to play at Mount Juliet.”

Pelley finished by calling the initial sanctions “proportionate, fair and, I believe, considered necessary by the majority of our members.”

It has been inevitable that the saga of LIV Golf vs. the status quo would reach this point, where words work hard to mean as much as actions, and lawyers work endlessly to decipher those words to help their clients establish favorable positions. Which side has the higher ground to stand on remains unclear.