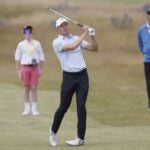 Jordan Spieth hits a shot on Saturday on the 1st hole at the Renaissance Club.

He talked about this week. And next. And where he plans to play his golf for the foreseeable future. It’s been that kind of week for Jordan Spieth, and that kind of career. The man was not more than minutes away from finishing his third round at the Scottish Open, and reporters wanted to know his thoughts on, well, everything.

Part of it, too, is Spieth isn’t afraid to dish, and Saturday was no different. We’ll try our best to share.

“Do you ever think sometimes you hit an inordinate amount of crazy shots on the golf course?”

Good question. Spieth is magnetized to the ridiculous, isn’t he? He hit another miracle on Saturday, when, from 108 yards out on the 15th at the Renaissance Club, he dropped his ball about 10 feet short of the pin, it bounced a handful of times, and it trickled in for an eagle 2. Still, the question was a tough one; how do you even answer that?

“I’m not sure,” he said. “I mean, I think that given how early in my career went, most of my shots have been recorded. Not to say a lot of professionals out here have not hit plenty of shots you may not been able to have on video.

“Yeah, I try to believe that I have a knack for just getting it in the hole however I can and some days that means ball-striking and some days that means scrambling. I think the ability to try to find a way to shoot lower scores and willing it in has some effect. Had my fair share of breaks over the years. The ones that go in with the right speed are the ones that I walk away even happier with.

“I think the creativity, and not just on and around the greens. There are shots here that we would not even think about playing in the States, and what I mean by that is how low you flight some shots, how much club you’re hitting, how little club you’re hitting from certain yardages is pretty uncomfortable knowing pins are on corners of greens, and sometimes it’s just a little bit hard to believe. Sometimes it’s nice to get over here on links turf and play some shots in the wind, and ahead of the Open next week.”

“Every golfer wants to win in Scotland. What would it mean for you to win here at the Home of Golf?”

A layup, right? You can’t answer this one wrong. And Spieth has a chance at victory on Sunday, where he’ll start the final round three shots behind leader Xander Schauffele, and next week, when the Open Championship is played at St. Andrews.

“Yeah, I had to think,” he said. “I guess my Open was in England, so it wasn’t in Scotland. I think links golf is arguably my favorite kind of golf, and I don’t know of any country that has more fantastic links courses than Scotland, obviously being the Home of Golf. Rich history. It is the history in golf.

“It would be meaningful to win Scotland’s national championship, but the fact that it’s now a co-sanctioned DP World Tour, PGA Tour and Rolex Series Event, I think I just mentioned it earlier, having said that, it seems like it’s one of the biggest international events of the year.

“I’m just happy to be in position. Certainly a lot better position than I was when I finished yesterday’s round.”

St. Andrews, seven years since we’ve been there. What gives St. Andrews the magic?

“I think the history, but also, I think really the back nine playing back into town,” he said. “I know that that’s relatively common for links courses in common, but it’s not very common for what we normally see.

“Hitting over a hotel on a hole, and trying to keep it off the cars on the next hole, it’s got — it’s probably one of most relaxing first tee shots, and you think 18 would be the same, and you get to 18 and when there’s something on the line, you’re trying to position it perfectly. It’s its own unique test. It can be the easiest major championship venue that we play, but it can be one of the hardest just given the Scottish weather.

“This year looks like it might get really firm and fast. The last time we played there, we were delayed because of wind and I don’t think we’ll have that. But it might have a different set of challenges than seven years ago.”

“Just before we let you go, you yesterday once again reaffirmed your position with the PGA Tour and denying obviously the fact that you are in conversation with LIV. Do you feel a need you can do that so you can focus on doing what your real job is?”

Tough one. The question of the moment, isn’t it? Are you, or aren’t you? We’ll try to piece this together as best we can.

You know already that PGA Tour and DP World Tour pros are heading to the controversial, Saudi-backed league. But Spieth? A website and a Twitter account thought so. Earlier in the week, Golf Monthly wrote that he was considering an offer, then the Twitter account, @secrettourpro, tweeted on Friday afternoon that he would be leaving for LIV altogether — only for Spieth to tweet out a few hours later that “any reports that I am contemplating competing anywhere other than the PGA Tour are categorically untrue.” (He also liked a tweet that was critical of the Secret Tour Pro account.)

“No, I think I was just made aware after the round of some false reports, and so at that point, I think that maybe I had not been vocal enough,” he said. “So maybe just set the record straight. It kind of stinks that anyone has to necessarily do it, but it’s not really a big deal. I didn’t think it was really that big of a deal.

“Certainly love competing and contending in these PGA Tour events, and another one of those rounds tomorrow may get it done.”