Handicaps of athletes, celebrities in the American Century Championship 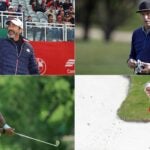 As a gaggle of golf-mad athletes, actors and other A-listers prepare to tee it up in the American Century Championship, at Edgewood Tahoe Golf Course, in Lake Tahoe, Nev., inquiring minds want to know: what’s the deal with their games?

Here’s a rundown of the (reported) handicap for every player in the field for the modified Stableford competition, which is Friday to Sunday.

A golf-world laughingstock no more, Barkley has regained enough form to get by in a hit-and-giggle. But the best part of his game is that he doesn’t take it seriously. The bookies don’t either. The odds for Sir Charles to win are 7,500-1.

Fresh off his fourth NBA title, the most famous Curry in the field is looking to seal the deal in a tournament where he has finished 7th, 4th and 9th in his last three tries.

The boy band star is putting on his big boy pants to compete in his American Century debut. If his handicap is honest, he’s a better player than those AT&T spots with Jordan Spieth make him out to be.

In the ring, the WWE superstar known as The Miz dispatches his opponents with a devastating move called the Skull-Crushing Finale. On the course, the only pain he inflicts is on himself.

While Barkley and his buddies go deep at the casinos just across the road, Romo is expected to turn in early, resting up at the lakeside Lodge at Edgewood to prepare for a tourney he is favored to win.

In the past, the Instagram star and social influencer has complained that people don’t take her seriously. Clearly, she can seriously play.