‘Does this code work if I want to buy a shovel?’ Pro rips Patrick Reed 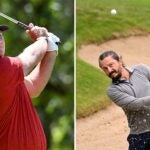 Patrick Reed, left, at the LIV Golf event this week; and Mike Lorenzo-Vera, at the Irish Open.

Mike Lorenzo-Vera has blasted the LIV Golf Invitational Series. Now he’s going after one of its bigger names.

Over two tweets and an Instagram post this week, the longtime DP World Tour pro ripped Patrick Reed over a bunker incident at the 2019 Hero World Challenge, the comments coming just under two months since Lorenzo-Vera questioned why players would play for the controversial, Saudi-backed LIV series. Reed’s account responded by blocking the Frenchman.

The back and forth began Tuesday, when Reed tweeted a discount code for this week’s second-ever LIV event, in Portland. That tweet drew this response from Lorenzo-Vera:

The dig was a clear reference to Reed’s Hero incident, where he twice brushed sand from behind his ball on practice swings before eventually being penalized. About three hours after his tweet, Lorenzo-Vera shared that Reed’s account had blocked him.

Lorenzo-Vera wasn’t finished. Two days later, he shared over his Instagram stories a graphic that this week’s LIV broadcast had been using to showcase players’ skill levels, only this graphic had been edited to add “cheating.”

“@preedgolf has strong stats!!!” wrote Lorenzo-Vera, who is also playing the Irish Open this week.

All of this comes after the pro shared thoughts on the Saudi-backed series in May. Then he wrote, “WTF is going on in some players head ???? Not enough [money emoji] on the @PGATOUR ??? Not well organized ? Bad schedule ? Bad courses ? Bad crowed [sp]? Before the LIV , looks like they were happy ! UNGRATEFULNESS !!!! That’s the only word that comes to my mind. #education”

That tweet, along with his responses to comments, appeared to be in response to an incident involving Sergio Garcia at the Wells Fargo Championship. There, during the first round, Garcia was told by an official that he had found a lost ball after the allotted three minutes, to which the Spaniard responded: “I can’t wait to leave this Tour. I can’t wait to get out of here, my friend.” And Garcia kept his word, joining the upstart series.

Lorenzo-Vera has won over $5.5 million on the formerly named European Tour, and notably, he was tied for second at the halfway point of the 2020 PGA Championship. His comments toward the Saudi league were also not his first, as he shared a 3-minute and 40-second video on Instagram in February, where he suggested that those playing in the league donate their money to charity.

“Hello, everybody. I’m doing this video because there is something that I don’t really like of what’s going on now with the Saudi league, and I would like to speak my voice on my social network,” he said in the video. “So I speak in English because hopefully this message goes a bit beyond the borders of France. I’m going to explain to you what has been going on through my mind the last week. I’ve been speaking with my agent about the Saudi league, and it was kind of like, well, imagine, man, if I play better and I can access to that league, it’s a huge amount of money that you can win. And it’s like a lottery ticket for the family, and that’s fantastic and stuff, OK.

“And during the week after that, it’s crazy. I was at the players lounge at during the tournament and the BBC was on, on TV, and there was a documentary about what’s going on in Yemen. And I’ve seen the kids, plenty of kids dying of lack of food and so skinny and so sad and I mean … This is just insane, the situation there. And I am no journalist, war journalist. I don’t understand everything, but the thing that I could understand about that commentary is that Saudi’s involved and … Feels strange to look at this. So maybe I don’t understand everything but as we say in France, there is no smoke without fire.

“And I would like to speak to the guys that signed for the league and that message. Maybe you could use that money, not all of it, but a good amount of that money, to give to charity for the kids in Yemen to bring some food to them. That would be pretty interesting. And at least I would do it. That is for sure. And I know I’m not in the situation and it can sound maybe jealous or whatever, but I think that sometime we need to come back to earth a bit.

“And I’ve seen the comments of Andrew Coltart and I think that he’s just 100 percent right — sometime we lose the reality and I’ve done the same sometimes; look, I’ve played twice in Saudi. And the more the time passes and the more I feel uncomfortable with it and we just need to not forget where we come from sometimes. Like the European Tour, the PGA Tour have been here for us and we can thank them. I think that to go away from them just for money, it feels a bit strange. And that money feels even more strange.”