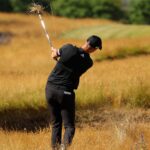 Nicolai Hojgaard plays from the left side of the 16th hole during Thursday’s first round of the Genesis Scottish Open.

GULLANE, Scotland — It is officially WInd Golf Season on the PGA Tour, here in Scotland, where everyone wants some of it. They just differ on how much of it they actually want.

The amount of wind took center stage during the conclusion of Thursday’s first round at the Genesis Scottish Open, when the prevailing wind at Renaissance Club was stronger than tournament officials expected. The morning wave saw gusts in the range of 15-20 mph, while afternoon groups dealt with gusts in the range of 30 mph.

Welcome to Scotland, right! That’s the refrain that plays out on social media when fans watch from the calm comforts of their living rooms. But for a few holes on this particular day, that amount of wind bordered on unfair, given the course setup.

Leading the way was the par-5 16th — an absolute monster of a golf hole — set up at 625 yards, directly into the wind. In other words, 625 playing 700. Tournament officials essentially maxed it out, using the furthest back tee box and cutting a back left pin. Playing to an average of 5.1 Thursday, it feels like a proper professional golf hole on paper. But in reality, it sounds like the setup was a touch unfair. Many players in the afternoon wave smashed driver and simply couldn’t reach the fairway.

Numerous players and caddies from the second wave stormed in after their rounds to discuss just how hard the test was, and how unfair the setup of the 16th became over the day. Shotlink tells quite the story.

Brian Harman, who is hardly the longest player, tapped out with a 227-yard tee shot, leaving him 350+ yards from the hay. Henrik Stenson, Matt Kuchar, Sungjae Im, Tommy Fleetwood — they all hit their tee balls directly at the opening of the fairway, and all came up short. Players needed to clear 245 to reach the short grass, and it’s clear from the data that many just couldn’t quite muster it. Justin Thomas, one of the longest players on Tour, smashed driver and made it, his ball rolling out to a whopping 260 yards off the tee, just 15 yards clear of the rough. He made a mess of it from there, leaving with a 6.

How did this happen? It can be explained away rather easily. The Scottish Open setup team did not anticipate the wind increasing to that extent. The issue for most players is when something like this happens during the first or second rounds. Wind we cannot control. Setup we can. And instead of push the setup difficult to the edge during the opening rounds, players will argue, save that test for the weekend! Why? Because if the wind is going to change throughout the day, as it tends to do here in Scotland, one half of the field may see a much easier setup on a given hole than the other half.

Some of that is tough luck. Good and bad draws have played out in Scottish golf tournaments for decades. The only recourse for players is to complain about it and hope that Mother Nature is equitable — she’s often not — and the setup is made more appropriate the next day. Well, tournament organizers answered their complaints by moving the 16th up one tee for Friday’s second round. 586 yards, playing into that same stiff wind. Easier? Probably. More fair? Certainly. Making up for Thursday afternoon? Now that’s up for debate.