Autograph-hunting at a golf tournament? Here are 7 dos and don’ts 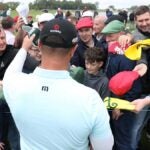 This was many moons ago, at the American Century Championship, at Edgewood Tahoe Resort, in Nevada. The Etiquetteist remembers because he was in attendance, walking alongside Brown, marveling at the size of the gallery he’d drawn — a large throng of eager autograph-seekers.

Brown was game to sign, just not at the moment. He had a point. There are right and wrong ways to ask for a John Hancock. With another iteration of the celebrity-packed American Century on tap this week, here are 7 rules to follow when you’re asking an A-lister to sign.

Asking for an autograph mid-tournament isn’t as bad as snapping a photo in a player’s backswing. But it’s discouraged. Aside from distracting the competitors, it slows play. At the American Century, the rules state that spectators aren’t supposed to ask when the players are on the course. The practice green behind 18 is a popular (and approved) spot. It’s also fair game to ask as players are coming off their final green. Most tournaments have designated spots for autograph-seeking. Get those details, and camp out there.

Why a mature adult would feel the need (other than for resale purposes) to get the signature of another grownup is a topic better suited for a psychiatrist than the Etiquetteist. The Etiquetteist will say only that the same rule applies as on a sinking ship: youngsters get priority.

Not that celebrities need our pity, but they do run the risk of carpal tunnel. Keep your requests to two or three signatures, max. And ideally just one.

At the Icons Series golf tournament in New Jersey last week, one of the star athletes in the field dressed down a spectator who’d circled back for a second round of autographs. The signature-seeker was clearly in the memorabilia business, collecting signed merch for resale. Celebrities frown upon this practice. That’s probably not your worry if you’re in that business. But if you’re not, you don’t want to be mistaken for someone who is.

Everything you know about asking for an autograph you learned in kindergarten. “Please” and “thank you” go a long way.

Celebrities are people, too. If they’re hanging out with friends and family or occupied with business that is cleary none of yours, take a deep breath and let them be.

7. Bring a pen and paper

Unless your mark is John Daly, it’s probably best not to ask them to sign body parts.