At the Open, even pro golfers are tourists checking out new courses 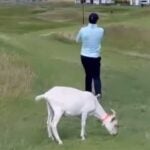 Jordan Spieth had some company during a recent round at Lahinch.

ST. ANDREWS, Scotland — There’s not much in golf that can impress pro golfers. They’ve seen it all, played most of it and can basically get their hands on anything they want.

So maybe that’s why it’s been so intriguing to see the top golfers in the world tee it up on the best courses overseas in the past week; and they even Instagram it like your own buddies’ trip.

Let’s face it. These guys rarely play random nearby courses en route to the next PGA Tour stop in the States, but during Open week? Yes, please.

In the last two weeks, Jordan Spieth, Justin Thomas and Rickie Fowler played Tralee, in western Ireland. Scottie Scheffler, Sam Burns and Spieth played Lahinch, about a three-hours drive south. And that’s just a small sampling. (Not everything is on social media, people.) They had galleries, greeted neighborhood dogs, took photos with surprised fans and sipped on pints of Guinness. There was even one video of Spieth hitting an approach as a goat grazed a few feet away — those things happen over here. (Context for that moment is necessary too, as some rouge tweets circulated that Spieth was playing with Tiger Woods. Tiger wasn’t there, but he’s so frequently referenced by the acronym GOAT — Greatest of All Time — some people actually thought a short clip with the text Spieth plays golf with a goat was essentially Spieth plays golf with Tiger Woods. No, it was actually just a goat.)

Speaking of Tiger, he gets in on these overseas buddies hangs too. He played Ballybunion with Rory McIlroy on Thursday.

North Berwick has been another popular spot for pros. Max Homa, showing a passion for world-class golf we can all admire, played the second round of the Genesis Scottish Open at the Renaissance Club on Friday morning and North Berwick on Friday night.

Thomas only played one “extra” course in Tralee he said, but he had bigger plans as a backup.

“I would have loved to play a bunch more, but just when the timing and when we’re here and whatnot didn’t have the opportunity,” he said. “To be perfectly honest, if we couldn’t get into our hotel room here early this week I was going to go try to play a bunch, but I never played Gullane, or I’ve never played Muirfield. I’ve played North Berwick. If I want to go play a cool place in the States, it’s a couple hours. Like I’m never going to come over here just on a couple of days off to go play those golf courses. So try to take advantage of it.”

There’s something romantic about Scottish, English and Irish golf. The courses are old, quirky, modest, interesting, inclusive and fun. In the States, if it rains you cancel a tee time. Here, you embrace it, and if you are a real golf sicko you smile about it because now it’s a true links experience.

So why is it such a big deal these guys are playing bonus links golf in their free time? It’s not, really, but in a way it’s endearing to see their desire to play the best courses in the world in the far tucked away corners of it. When they aren’t playing for history and glory and $2 million winner’s paychecks on Sundays, they are really just like us, trying to shoot a low score on a cool course they read about once.

Josh Berhow is the managing editor at GOLF.com. The Minnesota native graduated with a journalism degree from Minnesota State University in Mankato. You can reach him at [email protected]