11 major-making moments in the evolution of The Open Championship 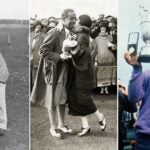 The Open Championship isn’t short on history — far from it.

In memory of Americans Walter Hagen, Bobby Jones and all Claret Jug holders, here’s a timeline of 11 major-making moments at the Open Championship.

Death of a Scotsman. Allan Robertson’s tombstone in St. Andrews notes he was “for many years distinguished as the champion golfer of Scotland.” Truth. In 1860, the members of Prestwick decide to hold a tournament to determine the new, best professional golfer in Scotland. The Open is born.

Wide open. The day before the second Open, Prestwick’s members unanimously resolve “that the Championship Belt to be played for tomorrow and all future occasions until it be otherwise resolved, shall be open to all the world.” The Morris house became full of belts: Old Tom and Young (in 1873) bag four each.

English invasion. The world starts to arrive. Slowly. Amateurs John Ball and Horace Hutchinson are the first Brits to play in The Open. Ball wins with a 36-hole total of 164 at Prestwick. Runner-up Willie Fernie, from Troon, gets drunk sitting on an overturned bucket and presumably cusses England.

Four! The first Open at Muirfield is also the first four-round 72-hole Open. It’s not the first 72-hole tourney ever, but, being The Open, it sets the standard.

Yanks. Americans Walter Travis and F.O. Horstmann turn up at Sandwich (modern Royal St. George’s) to play in the Amateur. Travis wins. Both stick around to play in The Open too — the first U.S. players to do so.

Vive la France! Champion golfeur de l’année. Arnaud Massy, straight outta Biarritz, becomes the first player from continental Europe to win The Open. It’s the Frenchman’s third try, and he is the first champ from beyond the home island.

Da Haig! Walter Hagen is the first U.S.-born player to win The Open, fueling a post-war rush of American dominance. After 1933, U.S. participation and performance slacks.

Slam! Bobby Jones wins the Grand Slam, formalizing the idea of a cluster of majors with The Open at its core, globally.

Qantas be praised! Air service commences from Brisbane to London. (Future five-time champ Peter Thomson will not have to paddle to the UK.)

King! After years of U.S. players dissing The Open (and whining a lot in the process), Arnold Palmer arrives in St. Andrews and injects new energy into The Open. From this point forward, U.S. players come in droves, and The Open is indisputably the world championship of golf.

Jack(lin). For the first time since 1951, a player from the UK wins The Open. In doing so, Tony Jacklin parks a European renaissance that includes Seve Ballesteros (three Jugs), Nick Faldo also three), Padraig Harrington (back-to-backs), Rory McIlroy and the awesomeification of the Ryder Cup.